Manual vs Automated Testing — What's Best for Your Project?

Testing is a vitally important element of software development lifecycle, as it has many defining benefits for improving the quality of the final product and reducing its total cost of ownership. Applying a proper software testing method can bring additional perks for your project and save resources in the long run.

Software testing includes a large number of categories, such as smoke testing, unit testing, performance testing, regression testing, and system integration testing, among others. Analyzing these testing types, we noticed that some projects require automation, while others show better results with manual testing. As there are a lot of talks about automation in software testing nowadays, different businesses need assistance while choosing the best solution among manual testing, automated testing, or a mix of both approaches.

Considering the importance of software testing, we’ve made an impartial structured guide to manual vs automated testing to help you make the right choice for your specific project.

What Is Manual Testing?

During manual software testing, quality assurance (QA) engineers look for bugs and issues manually by following predefined plans and test cases. The main task of a QA engineer is to simulate users’ behavior and analyze all emerging issues and bottlenecks while interacting with a website or a mobile app. Once testers notice a bug or an issue, they point them out and make reports for the development team. The developers then replicate the same bug or issue and fix them.

There are several types of manual testing: 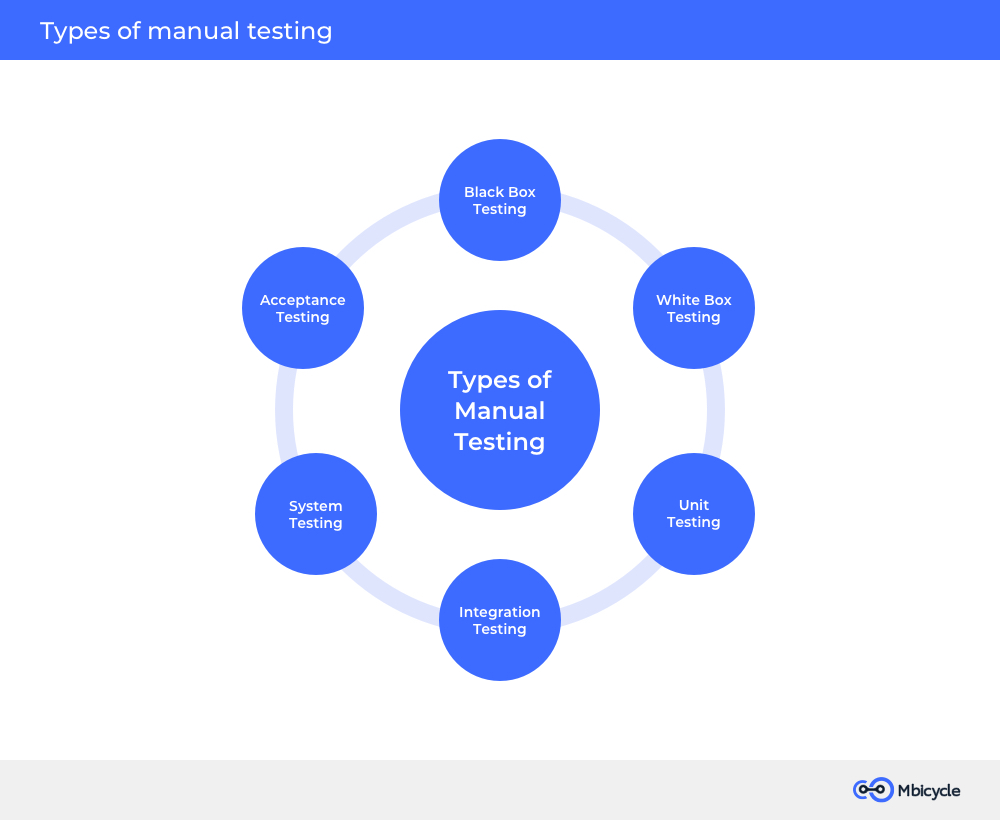 Here are a few major pros of using manual testing:

Together with the advantages listed above, manual testing has the following downsides:

Alexandr Mashkov
Sales Manager
Do you need professional
software development?
We are ready to leverage our expertise
to set off your project.
Get a Quote

What Is Automated Testing?

Automated testing is based on pre-scripted tests that run automatically and compare outcomes with the expected ones to determine whether an app (or a piece of code) performs well or not. Even though this testing type implies running every testing operation automatically, it still requires involving a QA engineer to create initial testing scripts manually.

To complete automated tests quickly and cost-efficiently, it’s crucial to choose the most appropriate automation framework for your case, as it helps optimize the entire process, increase test productivity, and reduce costs.

There are several types of automated testing frameworks your QA team can work with: 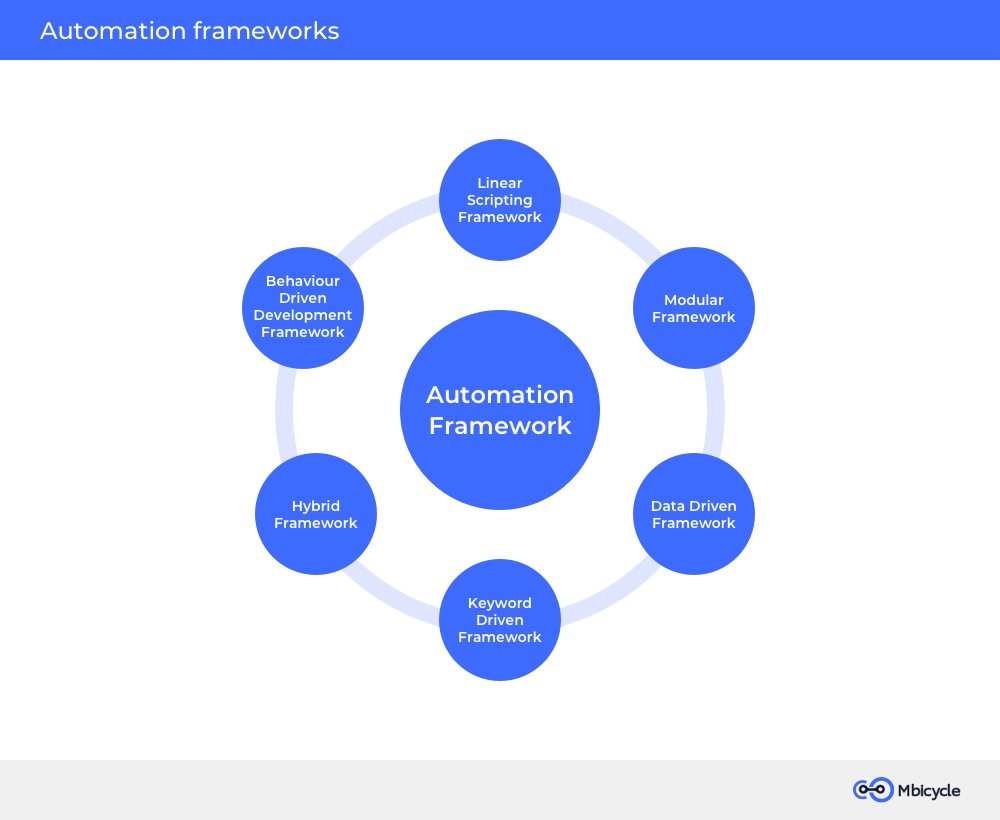 Let’s take a look at the major benefits of automated testing:

The first and most obvious difference between manual and automated testing comes from their names. The former testing type is performed by QA engineers manually, while the latter is run automatically following predefined scripts.

There are a few more aspects distinguishing manual testing from automated one. Keep your eye on these while choosing the proper testing type for each software project:

After discussing the major differences between manual and automated testing, we are going to define cases when it’s more efficient to use manual testing, along with some tips on moving to automated testing if it fits your project better.

When Is Manual Testing More Efficient?

Despite all the benefits of automated software testing, there are still a few cases when manual testing is more efficient, such as:

With the tools and methods of automated testing becoming more accessible by the day, more and more companies are gradually moving to it. If your company decided to try automated testing too, we have a few tips.

Moving from Manual to Automated Testing

The first thing to consider is the cost of test automation. This parameter will be rather high if you need to run a test only once, but with every next launch, the testing cost will be going down as the scripts are already written and configured.

It’s completely the opposite of manual testing. If you need to run a test once, it requires fewer resources, but with every next launch, the cost of manual testing will increase, because it involves additional scheduling and human input. 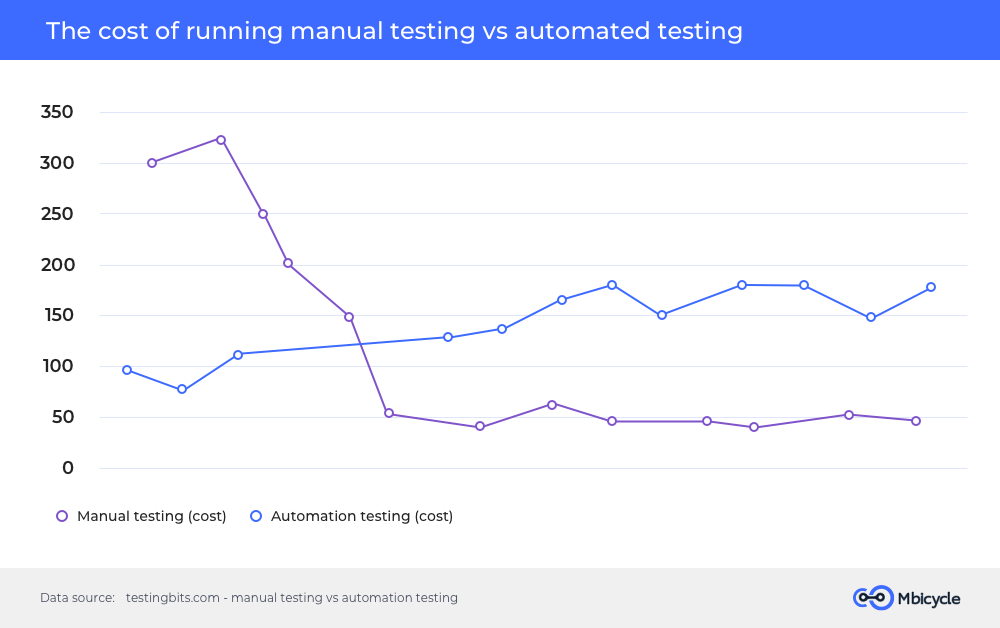 With this in mind, you can decide if moving from manual testing to automated one is rational enough for your company or a particular project. If it is, there are a few issues you need to know before the start:

Knowing these issues and solving them timely will help your company move from manual to automated testing easier. If for any reason you aren’t ready to give up the familiar manual testing method, or just don’t have sufficient resources at the moment, you can always get assistance from our team. Following the industry’s best practices, we are gradually moving from manual to automated testing, as well as efficiently combining both approaches. For example, our QA department has already written and successfully set up automated tests for MyTable and Door of Clubs projects, using relevant software tools.

Automating testing processes all at once is a tough task for most professionals. Moreover, not every software project wins from implementing automation, and there are still a few cases when manual testing proves more efficient.

On the other hand, the reality of the app development market shows that the efficiency of software testing is closely connected with automation. Automating tools and methods are improving every day, becoming more reliable, reducing the time and cost of software development, and keeping up the high standards of final products.

To summarize our article, here’s the comparative table with manual vs automated testing characteristics:

ASP.NET vs PHP – In Search of the Right Programming Platform for Your Project

ASP.NET vs PHP – In Search of the Right Programming Platform for Your Project

Find out some useful tips from Mbicycle’s web developers about which platform — ASP.NET or PHP — to choose for a web application.

Read our article and learn how virtual and augmented reality in sports have improved this industry, and how they can benefit your business.

Xamarin vs Cordova — An Unbiased Comparison

Xamarin vs Cordova — An Unbiased Comparison

Read our impartial comparison of Cordova vs Xamarin where we clarify which is the most suitable framework for cross-platform development.