ASP.NET vs PHP – In Search of the Right Programming Platform for Your Project
April 26, 2020

Nowadays the question of what platform to choose for more efficient web app development still remains pressing for developers and project managers alike. To help them answer it, we highlighted the main pros and cons of both platforms and specified some points to consider when choosing ASP.NET or PHP for a project.

Both PHP and ASP.NET have wide capabilities and a vast number of developers using them. These factors make it difficult for new developers to choose between them. On the one hand, PHP is a common scripting language that developers heavily rely on; on the other hand, ASP.NET has such a juggernaut as Microsoft behind the platform.

Since both of these technologies are quite popular in the programming world, the disputes about which one is better do not subside. In this article, we present you with an unbiased comparison of the two platforms, but before comparing ASP.NET vs PHP, let’s reveal some essential aspects of each platform.

ASP.NET at a Glance

ASP.NET is a backend web development tool launched by Microsoft to provide developers with the way to create dynamic web applications and solutions. The ASP.NET framework can be used with C# and Visual Basic (VB) programming languages, but the former is used more frequently. The Core version of the framework is also compatible with the initial version of ASP.NET.

Working with ASP.NET and ASP.NET Core MVC on a large variety of software projects, MBicycle’s developers have defined several pros and cons of the platform.

The Pros of ASP.NET

The Cons of ASP.NET

PHP at a Glance

PHP (stands for hypertext preprocessor) is an open-source programming language used for developing web applications and can be embedded in HTML. The PHP framework is great for beginners because it provides simple and easy coding methods. At the same time, PHP is great for experienced developers too as it offers a large number of advanced features.

The PHP platform includes a variety of free open-source libraries. You can also efficiently integrate a huge number of popular databases with an application built in PHP. This platform also supports Java and distributed object architectures, as well as major protocols such as POP3, IMAP, and LDAP, which helps organize multiple-tier development in the PHP ecosystem.

The Pros of PHP

The Cons of PHP

Alexandr Mashkov
Sales Manager
Do you need professional software development?
We are ready to leverage our expertise
to set off your project.
Get a Quote
PHP vs ASP.NET – Why Choose Among These Two?

Both ASP.NET and PHP are great platforms for web development, so their comparison is much welcomed in today’s market realities.

According to W3Techs data on ASP.NET vs PHP usage as of March 10, 2020, the PHP platform is used by 78.8% of all the websites in which server-side programming language is precisely known, whereas ASP.NET is used by only 10.5%.

In terms of their similarities, both platforms have widespread communities and open-source versions for a smooth and easy start.

When talking about PHP vs ASP.NET, it is also fair to note that in standard PHP builds you can find various functions familiar to C#.

ASP.NET vs PHP – Points to Consider

Comparing these two programming platforms and choosing PHP or ASP.NET for your project, you’d better keep in mind the following differentiators of each platform: 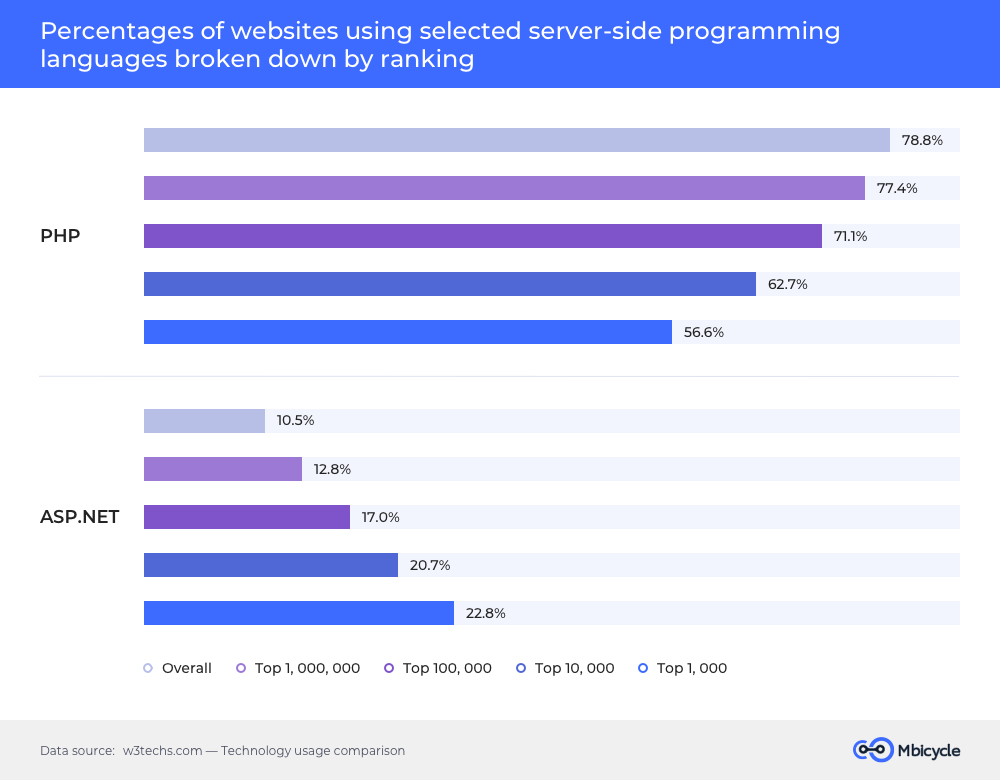 To better illustrate the showdown of ASP.NET vs PHP, here is a comparison table:

PHP vs ASP.NET – Summing Up

Well, we hope that at this stage you have clarified the questions you had or refreshed your knowledge about PHP vs ASP.NET. Based on the pros and cons highlighted in this article, as well as a few points to consider we marked above, we believe that developers, team leads, and project managers can now choose the right platform — ASP.NET or PHP — for their web software solution much more easily.

Find out some key differences and comparison results for Java vs PHP platforms to improve your web development practices.

Read our impartial comparison of Cordova vs Xamarin where we clarify which is the most suitable framework for cross-platform development.